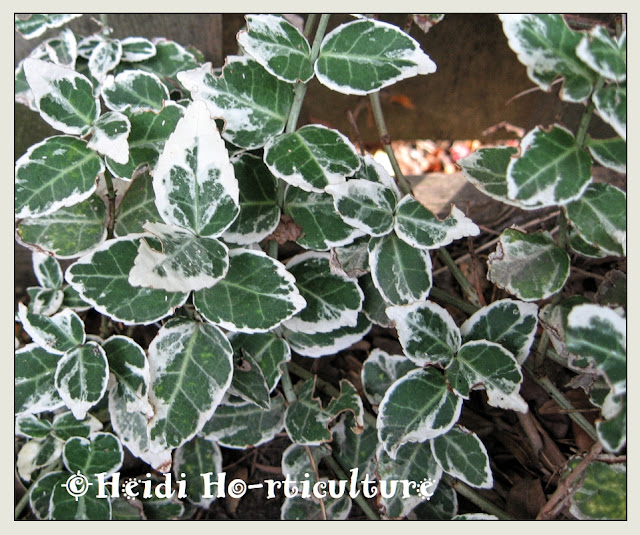 I don't think there's an Euonymus fortunei plant out there that hasn't been pestered by this insect.  Variegated, ground cover, topiary - they all can get it. Unfortunately, when folks first notice the plant covered with scale, it's at a point where it is so difficult to get rid of them. 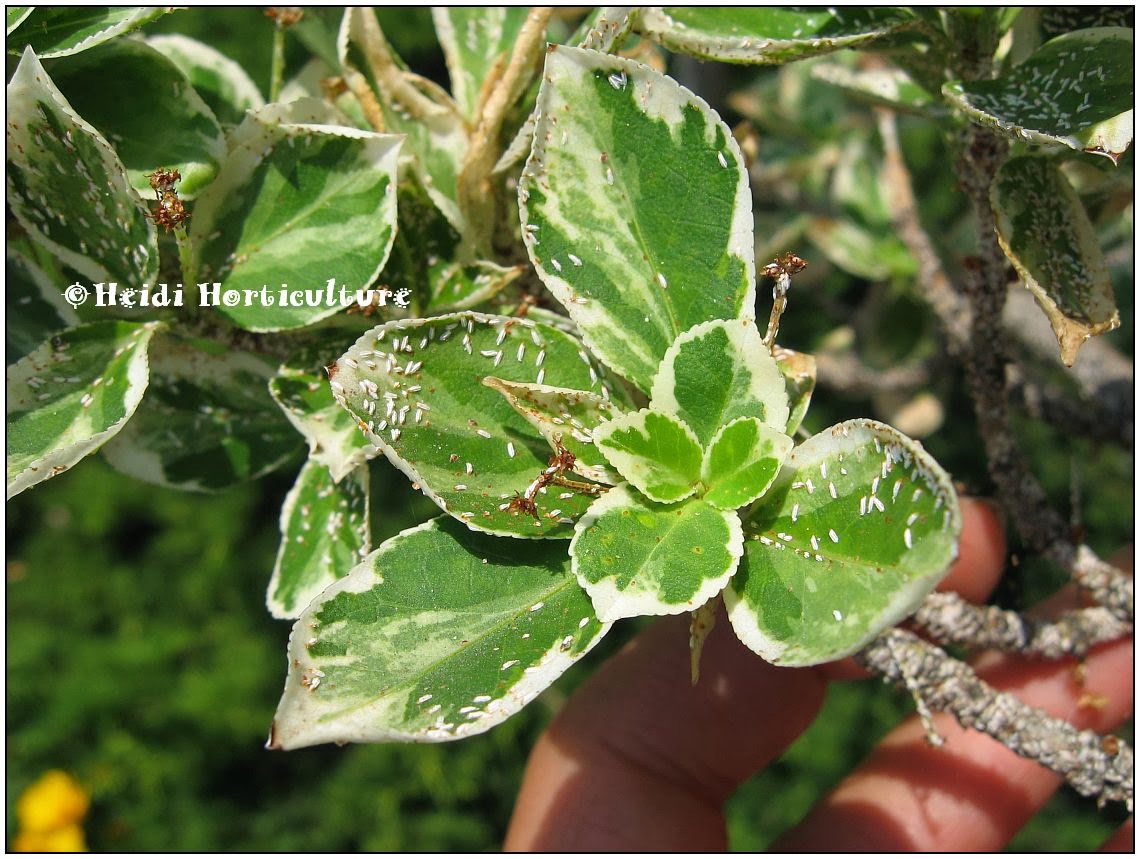 Euonymus scale (unaspis euonymi) is a sap sucking insect that stays under the radar so to speak, until population levels peak - giving away their secret.  They begin to hide on rougher bark branches (towards the mid-inside section) of the plant, reaching newer growth once the new buds begin to break in late early May. Hiding underneath new leaves, they begin to develop multiple life cycles as they populate the plant. Males are white and the females (slightly larger) are grey. They have a juvenile crawler stage which are usually an orange-yellow colour. 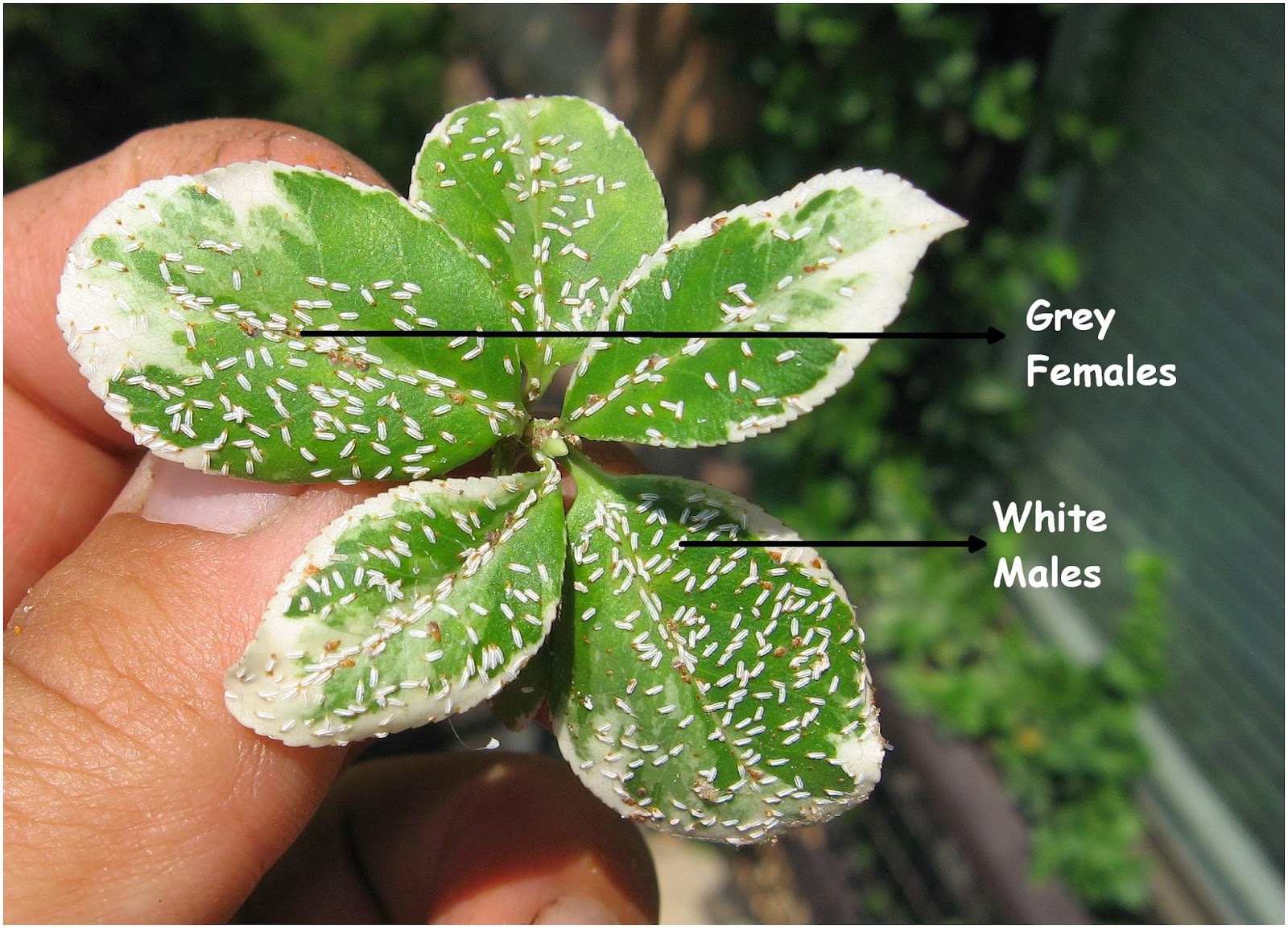 Scale fixate themselves, sometimes several insects deep when infestations are bad. When the plant is completely covered, one can take a sharp tool and scrape quite a thick coating of scales off the euonymus branches. It's quite gross, really.


What to do when you see this: 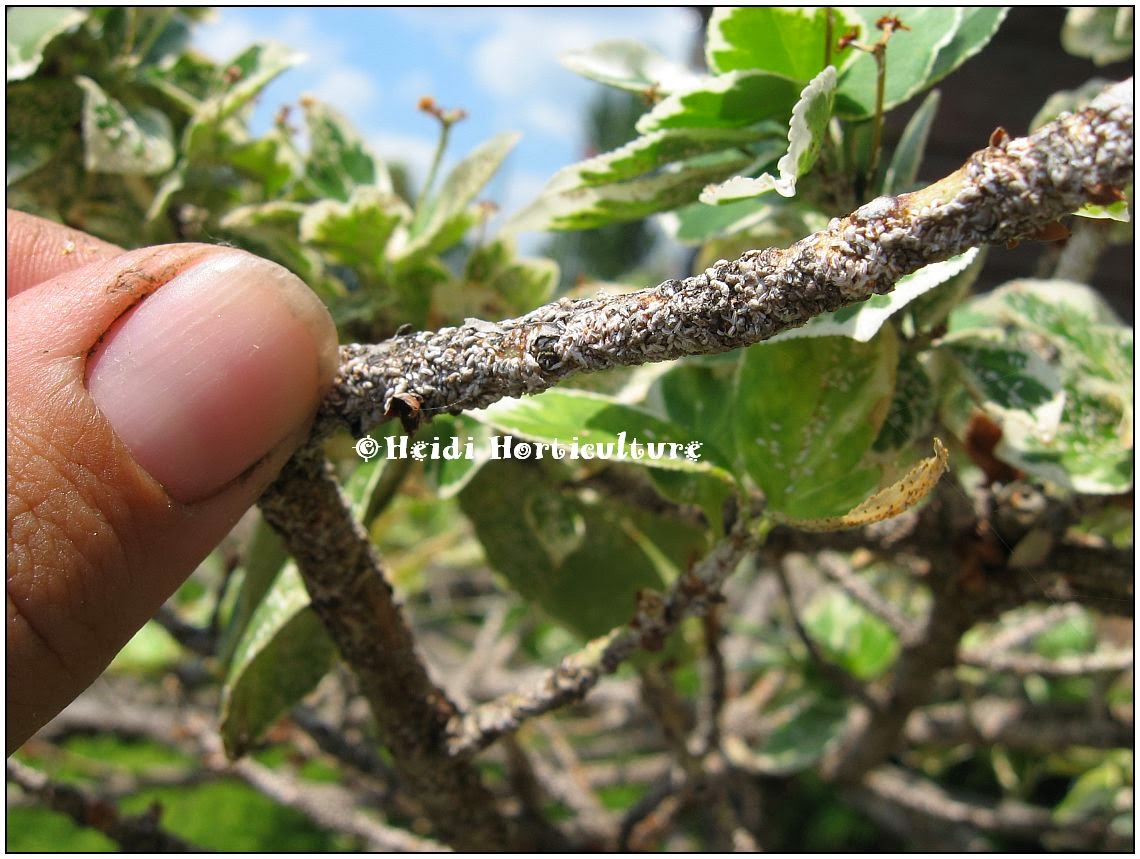 1) Where you can, prune out and destroy infested branches or plants before the young crawlers emerge. Pruning is even beneficial just by removing adult scale numbers. Yet, if the plant has lost many leaves, this becomes difficult to manage.

2) Insecticides are virtually useless and ineffective, unless timed properly.  They are only useful when they are applied at the onset of infestation and at the overwintering adult and the crawler stages. This can be difficult to time.

3) Dormant oils: this is an effective method to coat and suffocate the female scales that are filled with eggs.  In order to work, the oils should be applied in early spring or late fall, when the plant is dormant and when temperatures are cooler.  Branches, stems and leaves must be thoroughly coated in order to suffocate the overwintering adults. Using oils can burn leaves if applied too late towards hot summer months, so be wise in applying.

4) Water.  I can't say enough about water. Watering the plant will help give the infested euonymus ample moisture to draw from, since the insects are sucking its sap.  But water is also a wonderful way to help dislodge the insects from the host. High pressured water from a simple garden hose can reduce numbers significantly, with a little coaxing from a brush or your hands rubbing over the stems as you spray. It's an arduous task, but one I've used myself during the summer months. There's nothing more dis-heartening than to see the scale bounce back in numbers after you've treated the euonymus bush earlier in the season. Spraying the bush with water every two weeks does significantly reduce the insects in number, giving the plant breathing room to take a rest from the infestation.  I've specifically sprayed after a good pouring rain. The scales soften their grip in rain and the hose pressure blows them off. You'll notice their floating bits in puddles around the bush once you've been thorough.

5) Don't bag or cover your euonymus over winter. I've seen it time and again, when folks think that euonymus need covering. What you're doing is limiting the harsher exposure of temperatures on the plant, protecting overwintering female scales. Frost kills a lot of insects, and bagging will just keep them cozy for spring to arrive. Also the bag doesn't allow snow, rain and the elements that help wash down the bush. Euonymus benefit from natural elements, just not salt! 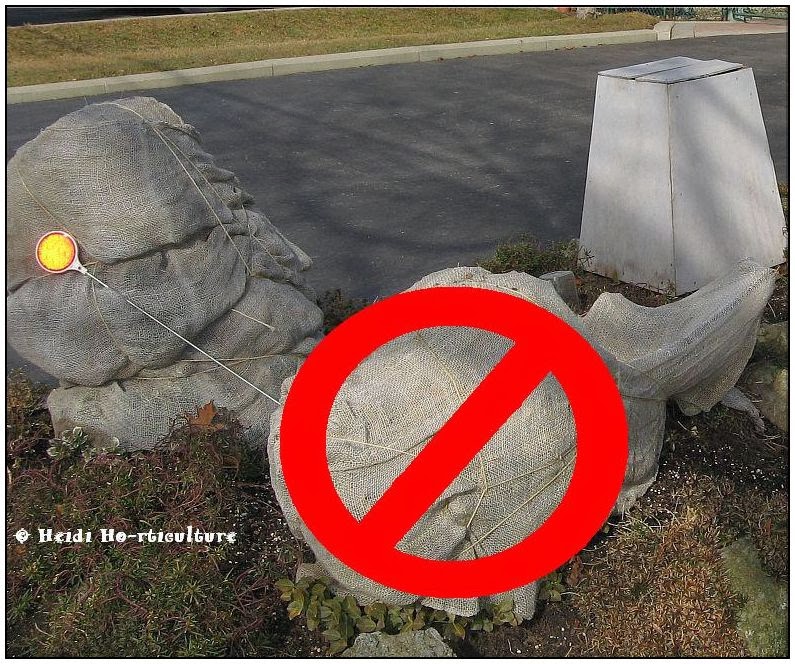 Unfortunately, once you've had scale, it tends to be a recurring problem. No doubt your neighbour has these same bushes, with the same problems - so inevitably you'll have them visit again.

Euonymus scale love hot temperatures. Making sure your plants are not in hot areas is a preventative practice.  Don't plant them next to a brick wall. This is a fantastic breeding ground for euonymus scale. Watering your bushes in drought conditions makes the euonymus stronger and more apt to fend itself away from the a light insect attack. Spray with water occasionally during the summer months. The is a key preventative.

Regular pruning is necessary, to promote aeration, new healthy growth - bringing vigor back to the plant. Don't just sheer the plant into a ball or round shape. Get inside the bush; prune out dead or weak branching. Allow air and sunlight to reach into the crown of the plant. This allows euonymus to recover.

Don't plant multiples close together. Space the euonymus plants apart. That way, if one really gets scale bad, it's not going to jump to the next.

Watch:   keep your eye on especially euonymus leaves. Watch for yellowing areas, stickiness, loss of vigor and leaves falling in summer. These are all SIGNS that point to an attack.

Persistence works in the end.

Here are also other plants that can also be pestered by Euonymus scale as well:

Be proactive. Always check every season for signs...