Ok, this has to be the worst sight to a gardener: 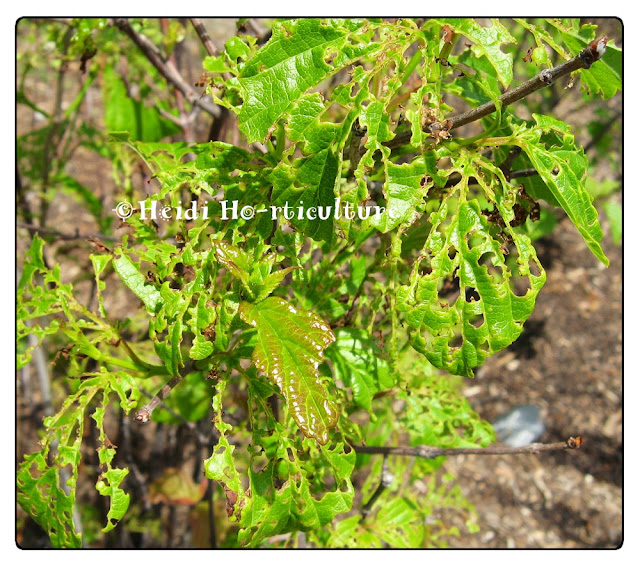 Nothing breaks your heart more than coming across this sort of devastation too late in the season. 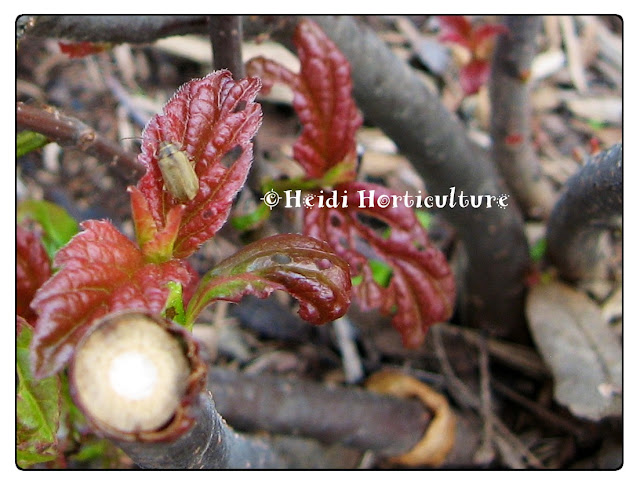 The Viburnum Leaf Beetle. There's only a handful of Viburnums this beetle doesn't eat (link here).  Unfortunately, when I first had a look at this Arrowood Viburnum in early June, it was too late. 3 weeks ago, I gave it a major prune anyway. 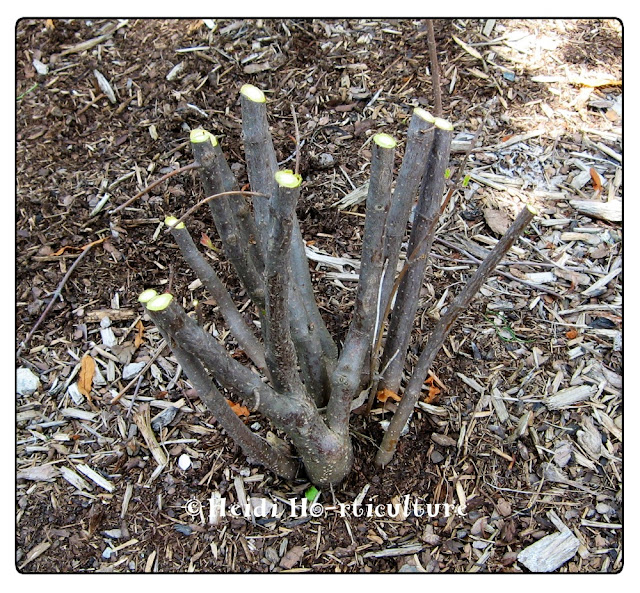 I had to cut the shrub down hard as a preventative. Had I done this in early April, I could of averted this ugly scene below: 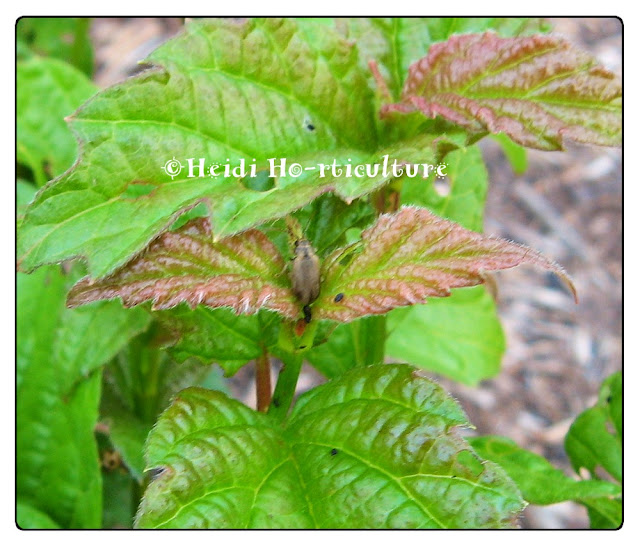 Brand new, succulent growth that the adults are now feeding upon. However, the bulk of stem growth that is left has been drastically reduced, which in turn will reduce egg laying sites after mating.

A relative new-comer to North America, (originates from Europe and Asia) these leaf eating beetles are by far the most frustrating. 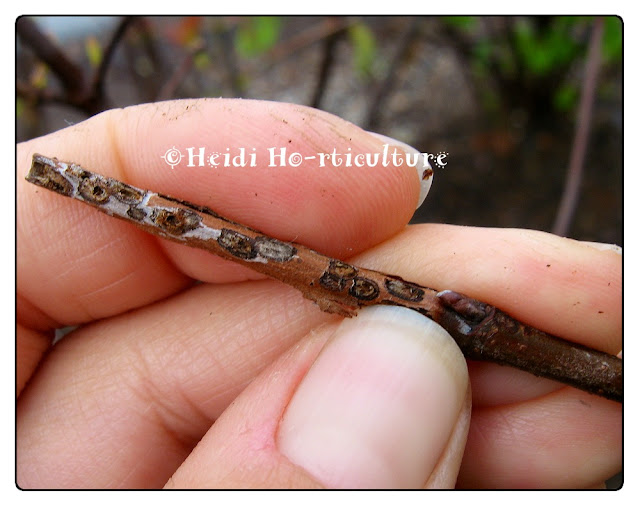 The adults poke and lay their eggs in the tender, new growth shoots. Here on the previous year's growth, you can see the exit holes from the egg laying piercings. 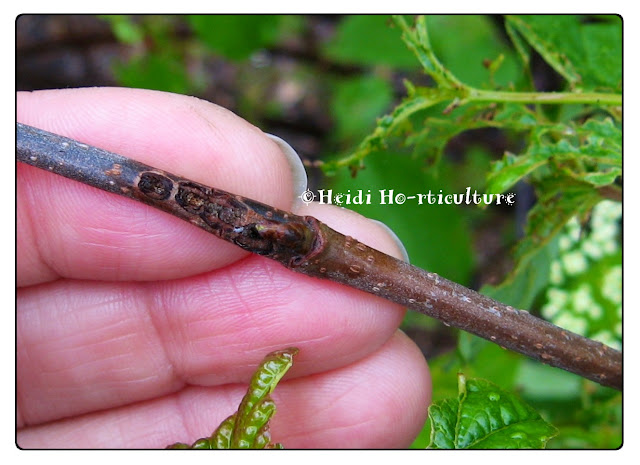 The beetles have (in this photo above) placed their egg piercings just above a leaf node. Close to possible leaves when they hatch in spring. Smart, eh? 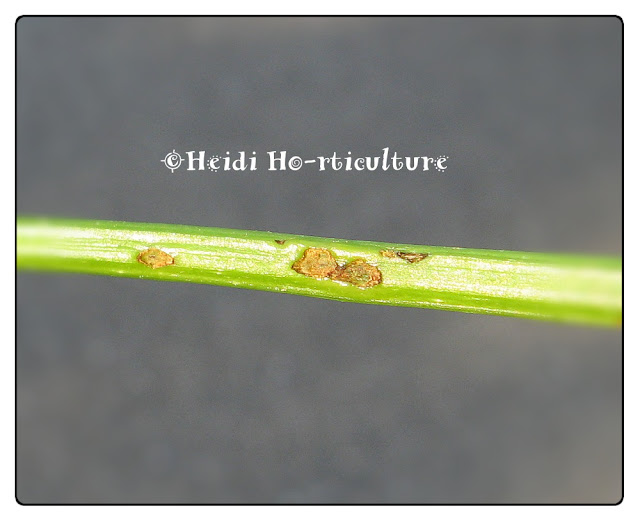 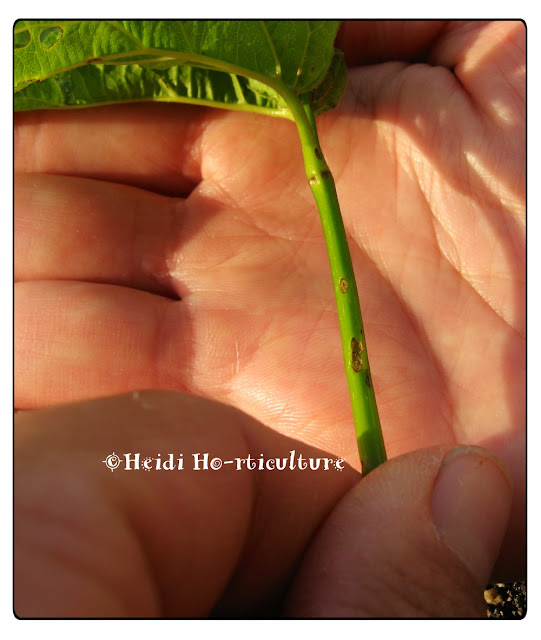 When the eggs are laid, there are abrasions on the stems that are not as noticeable as these. Especially, when the stems begin to harden off and go brown in the autumn. Sometimes, the tissue around the pierced holes go grey and discoloured instead of the normal brown healthy colour. Above, you can see how they look on new stem growth. In relation to my had, they are so tiny, but probably 10 or so eggs are laid in each pierced lesion. 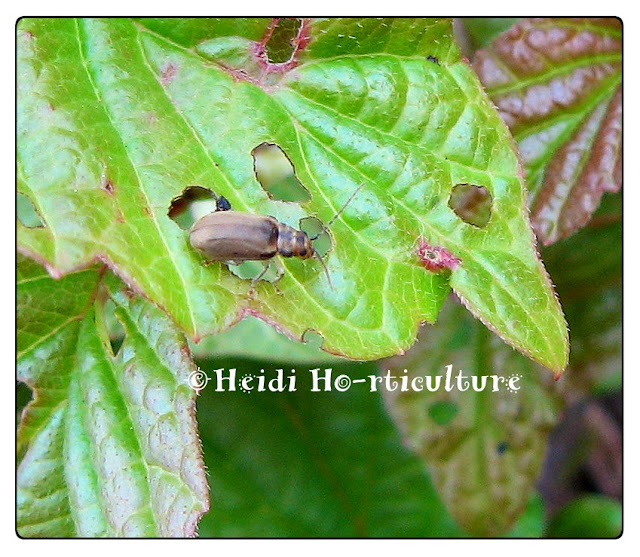 This time of the year, the adults feed voraciously and mate. Soon to lay eggs and pierce holes in the tender stems, starting the process all over again.

I removed as many adults by hand and squished them. Yuck. It is easier to remove the adults rather than the larvae. 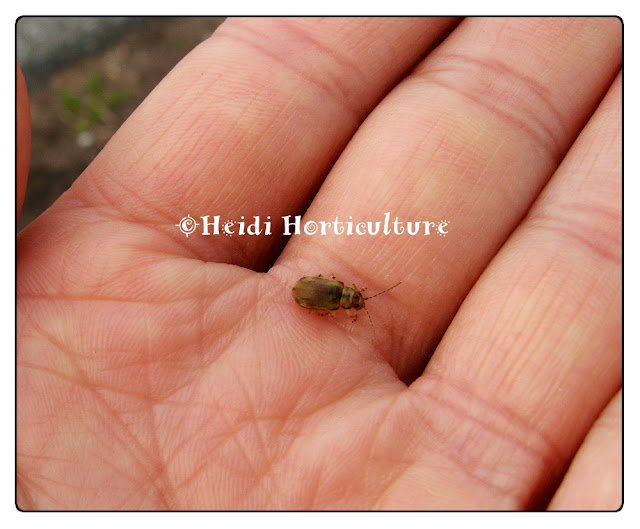 Life Cycle and Treatment: It's hard to believe this little beetle could be so damaging.

In early May, eggs hatch and larvae push through their winter home and devour new leaves emerging.  They feed on the undersides of the leaves. Going unnoticed until the damage is done. In June, they crawl down to the base and sometimes fall to the ground to pupate. I've read: cleaning up fallen debris and leaves help to remove pupating sites and reduce their chance to become adults. But, I still saw adults emerging from below after doing so.

Now that I have removed as many adults as I could see, I will keep my eye on the remaining foliage to see if I see more of the lace pattern on the leaves from their feeding sites.

In October, when the leaves drop, I will reexamine the stems for egg laying sites and cut away more growth to prevent the eggs from hatching next spring.

You can use dormant oil treatments before bud-break in spring, but it will only marginally reduce larvae numbers and not kill them all off entirely.

One note: you can use some contact sprays during the larvae stage, but sooooo many beneficial insects feed off the larvae. Direct spray contact will kill them too.

Pruning and a watchful eye will save what's left, better than any chemical.
Written By: Heidi-Hoe at Tuesday, July 07, 2015