Ok, two years ago, the only weed I would dare to eat were Dandelion leaves - that was pretty much it. Today, I enjoy eating several and the term "weed" has a whole new meaning.

I have a job because of weeds. When you truly examine plant life, you realize: weeds are just unwanted vegetation. But not all weeds are unwelcome.

The recent welcomed additions to my diet are: 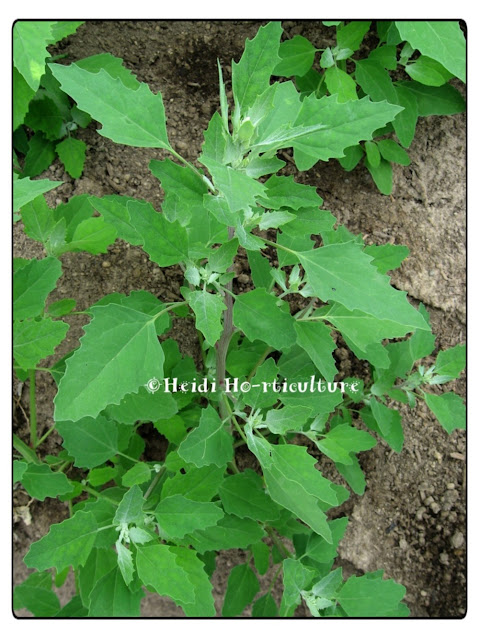 Lambs Quarters (Chenopodium album) is common in nearly all disturbed soil sites, in perennial borders, park land and growing in areas where turf is situated. It's a heavy seeder and will self seed virtually everywhere.

I only eat these when they are young plants. I prefer the tender new leaves.

Note: I've read you should be careful with large quantities of Lambs Quarters when eaten fresh. The plant has Oxalic Acid, but the acid is eliminated in cooking.  Adding a handful to salads as a fresh, crisp crunch and mild flavour. Similar tasting to Swiss Chard and Beet Leaves.

You'll find tender, newer plants in May and June. Although, new plants are also found all throughout the growing season- if you keep your eyes open and can recognize the difference.

Also known as Wild Spinach, it is loaded in Vitamin A and C. 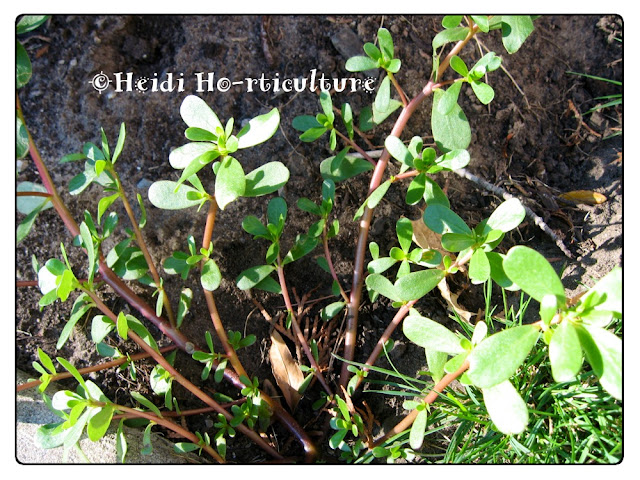 Growing under my cedar bush, I only take a stem or two at a time. The mature, fleshy stems have the best leaves. They are quite juicy, when picked fresh.


It shows up later in the season, usually by mid July. Found in nearly every growing situation.

I came to know this weed as food, when several years ago my crew and I were removing a heavy cropping of Purslane in one of our annual beds. A lady approached us and eagerly asked if she could take a bag full of our weeds.  I stopped to watch her diligently remove purslane from other weeds and gingerly put them in her bag.  I couldn't help but ask her what she did with them. English was her second language, and from what I could understand she made: 1) tea with it, 2) ate it in salads and soups and 3) used it in stir-fries. 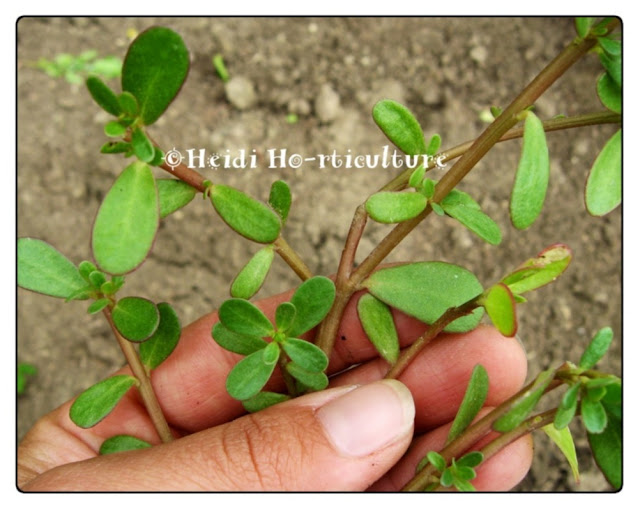 Googling its uses, I was very surprised on its health benefits and how many Asian and Mediterranean meals have it in their recipes. Highly nutritious, it too is loaded with Vitamin A and C.

Last year I transplanted a few plants into two of my containers and added the leaves to my salads. Now I find some pop up in my front yard. I leave some stems and tip growth to full maturity, as they generate flowers and seeds at their tip. This ensures they return next year.

The leaves have a slight tangy-ness to them and a great crunch. Lots of work to de-leaf them from their stem, but I got the hang of it.

The great thing about Purslane, it is edible up until frost. It doesn't get overly woody and unpalatable when the plant ages. It regrows quickly, is drought tolerant and loves the heat of summer. Leaves are also rich in Omega-3 Fatty Acids.

Here is one salad recipe: 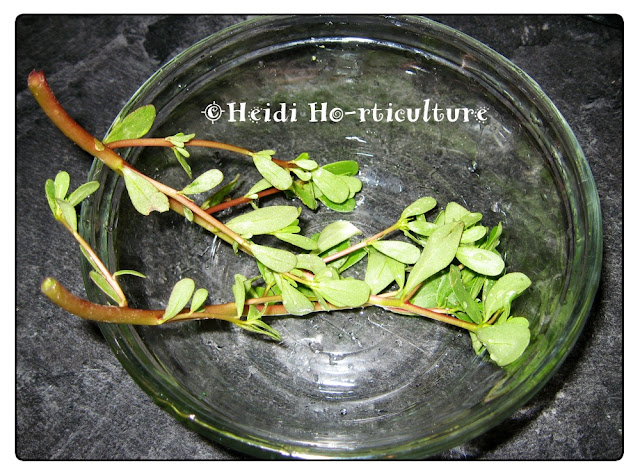 Wash the Purslane thoroughly. It grows right along the soil surface. Lots of grit usually comes with foraging it. 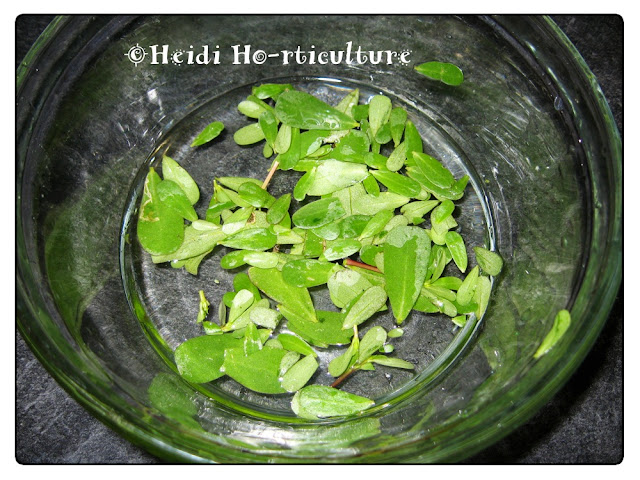 You can eat the stems, but I enjoy the leaves more. I remove each leaf; by holding on to the tip of the stem and running my index finger and thumb over the leaves, pulling the leaves off the stem as I go down. Watch for leaf-miners feeding inside the tissue of the leaves - discard. They love Purslane too. 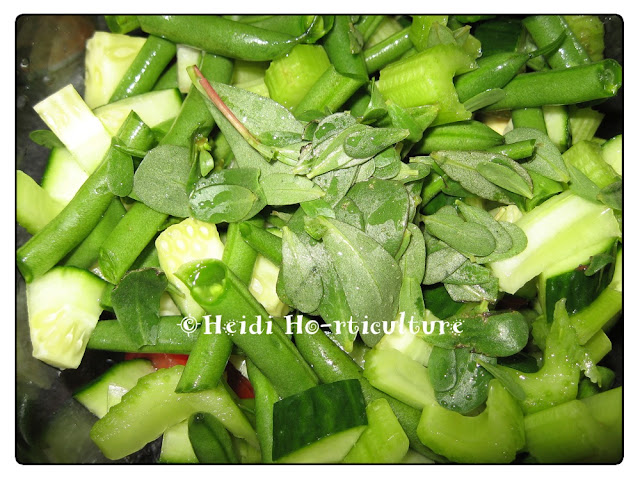 I generally add 1-2 tablespoons full in each salad I make. 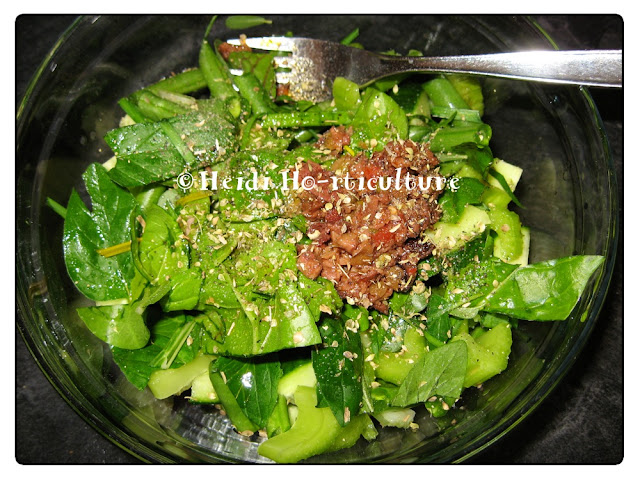 Next time you see it growing in between the cracks of the sidewalk or in your own garden, think twice about composting it!
Written By: Heidi-Hoe at Wednesday, July 22, 2015