I'm sure I'm not the only one who is concerned about Southern Ontario winters and spring thaws.  We never seem to get a slow warm up in spring anymore. Instead, there's constant fluctuations; +10˚C one day, -8˚C the next.

One of the results of these fluctuations, is mould and fungus development on many plants. 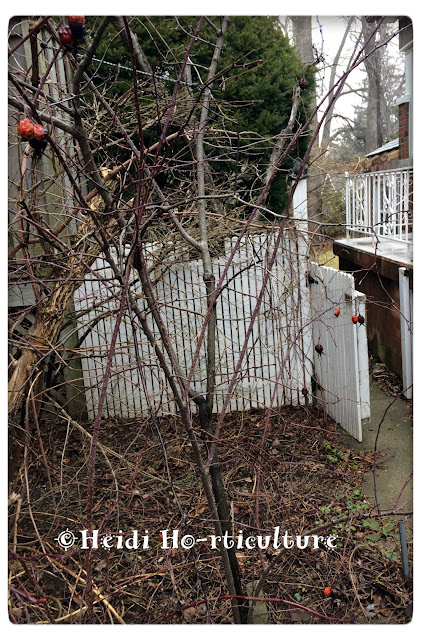 I just walked through the gate and noticed something on our hardiest of roses. 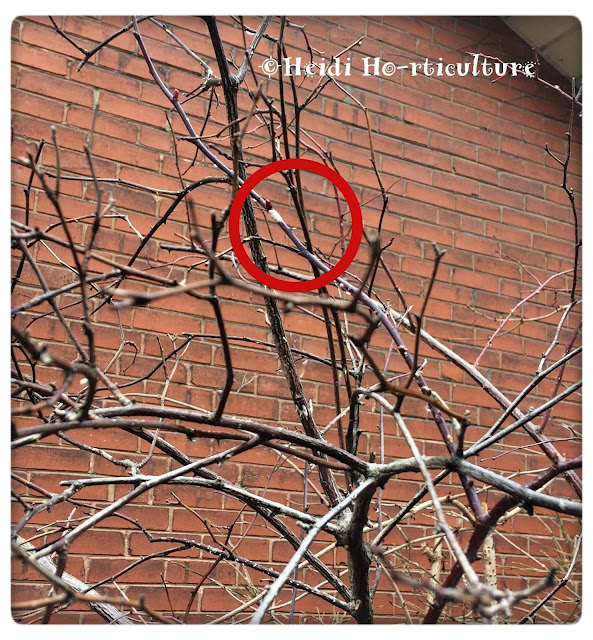 Do you notice it?

Rosa glauca is one of the main pollinator plants we use to attract insects and birds to the garden. 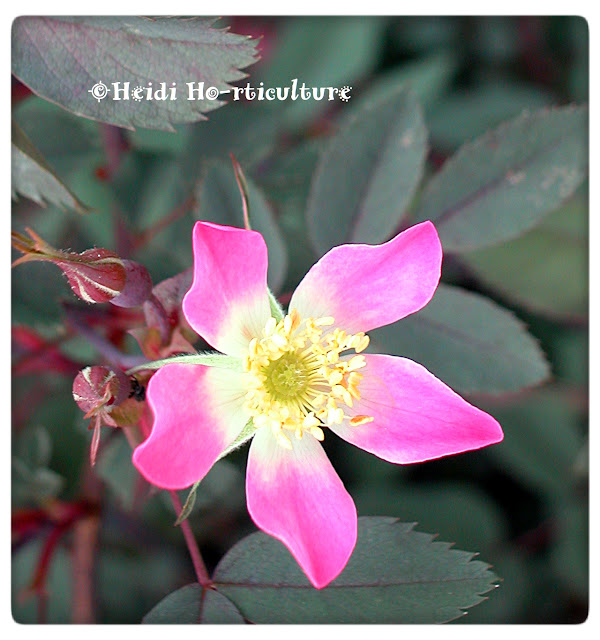 Rosa glauca's simple, single flowers attract so many pollinators. It's so lovely to watch and the flowers say nothing but hello and bring vibrance to a dark corner. 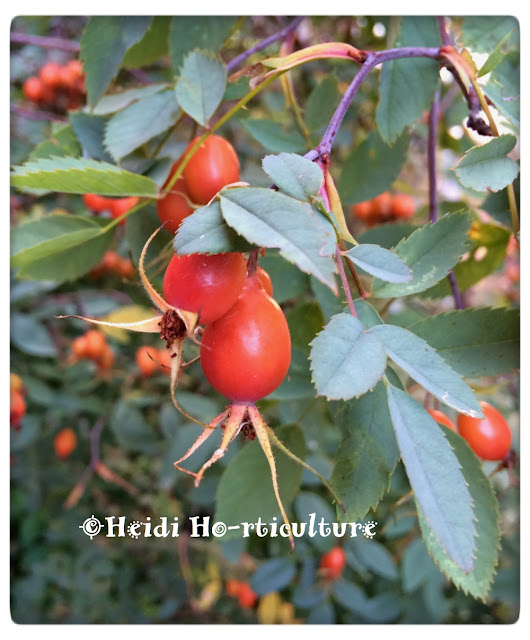 Great silver/blue foliage allow the orange-red hips to jump out in contrast. Birds love these hips. 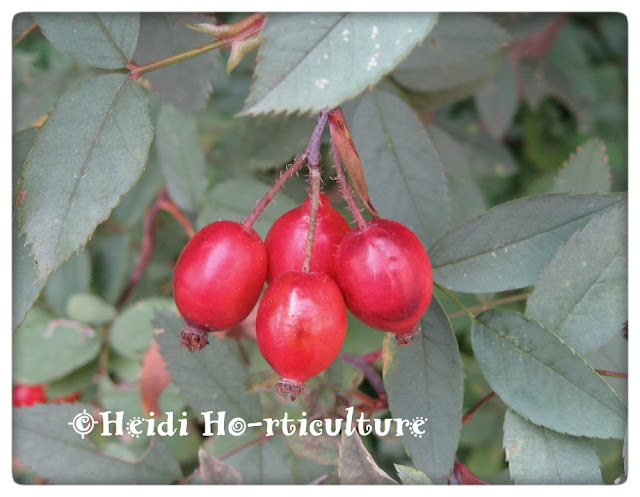 Incredibly tough and hardy, there aren't too many disease issues with this rose at all.

I've never dealt with mildew on this rose before, but as I bent down the stems to see the powdery white mass that I spotted way above my head, it revealed more on the other side. 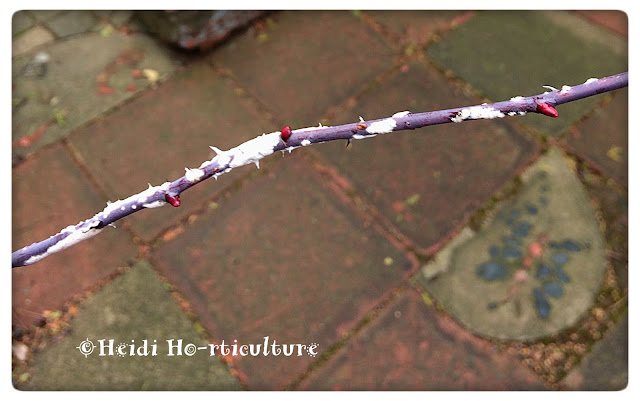 In fact, I found about 6 younger stems with this white furry coating. 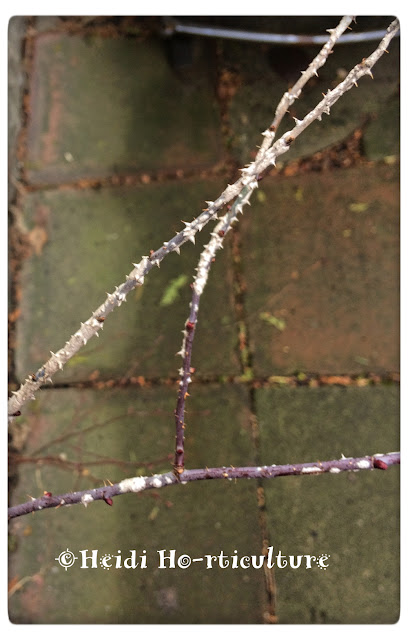 I pruned it back to about 12" below the coated area to avoid any mildew from coming in contact with other stems or the stem it was cut from.  Be thorough with removal and try not to dislodge any mildew or let it come in contact with any remaining stems. 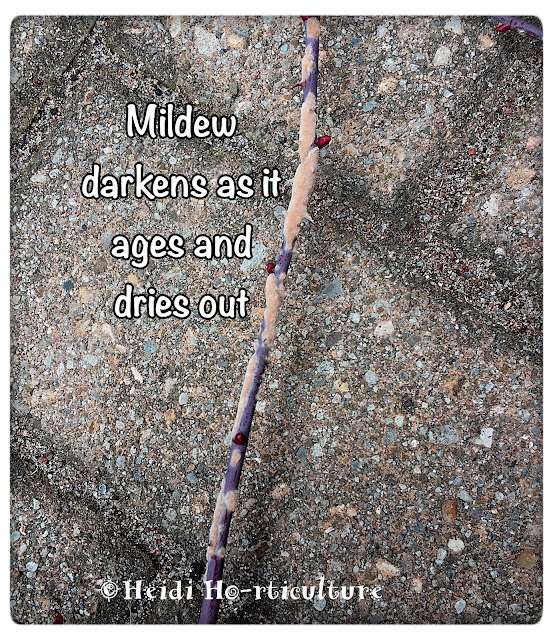 Do not compost these stems. Burn or put them out for yard waste pick up. This stem (above) was sitting in our yard-waste pile a day after pruning and you'll see the mildew age to a light brown/mocha colour.  I tucked it down into the bin, so that no spores would become air-born and invade other plants near by. 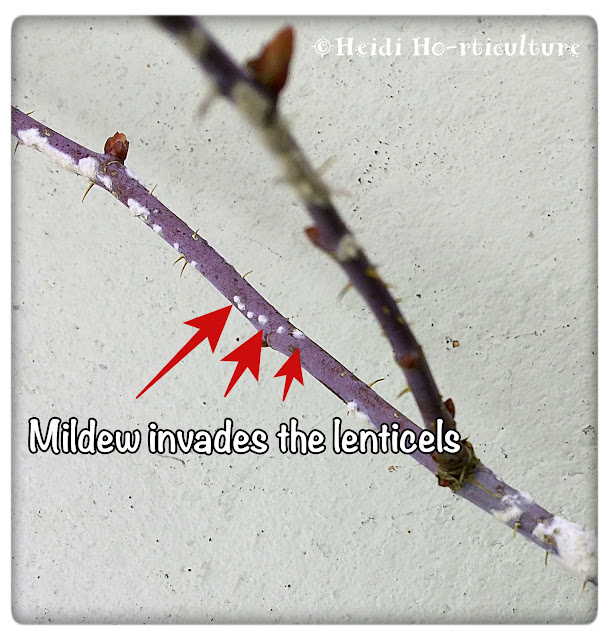 As I examined the stems closely, the mildew spores invade the breathing holes called lenticels of the stem. Eventually spreading into a cottony mass. If left, the mildew would reach the buds and cause the leaves to be coated as well as the flower buds. Eventually stunting the plant, making it lose vigour and possible flowering ability.

Once leaves start to emerge, I will examine the rose more thoroughly to see any overlapping branches or growth that requires thinning out - which helps to promote more air circulation and a better tidied appearance. This is rose we generally allow to ramble and become large. I rather hate pruning it needlessly.

At least finding it now has been one great preventative - so that we can enjoy a healthy plant this upcoming summer.