Usually our Nippon Daisy has glorious large flowers which last forever.  The warm autumn we are experiencing in Southern Ontario has made our Nippon Daisies a huge attraction to bees, butterflies and other pollinators.

But when you see leaf petals and flower centres begin to look like this... 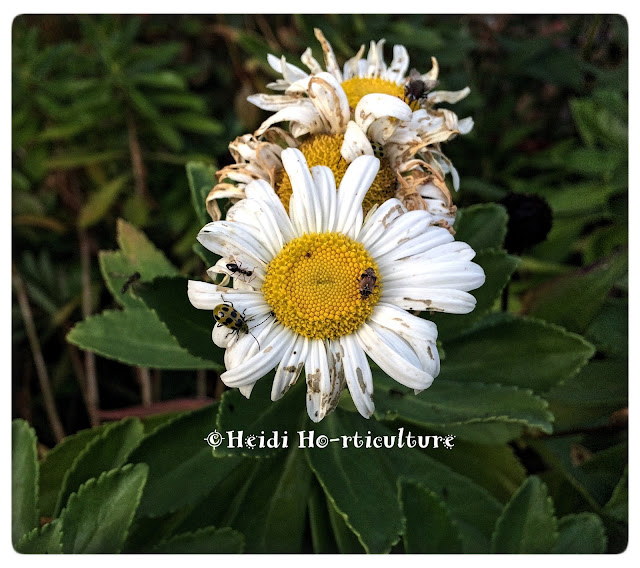 I tried looking for signs early in the morning, thinking slugs or some beetle, but didn't see any.  Then Saturday, I waited until the sun was shining bright.  Ah, ha!  Do you see the beetle? 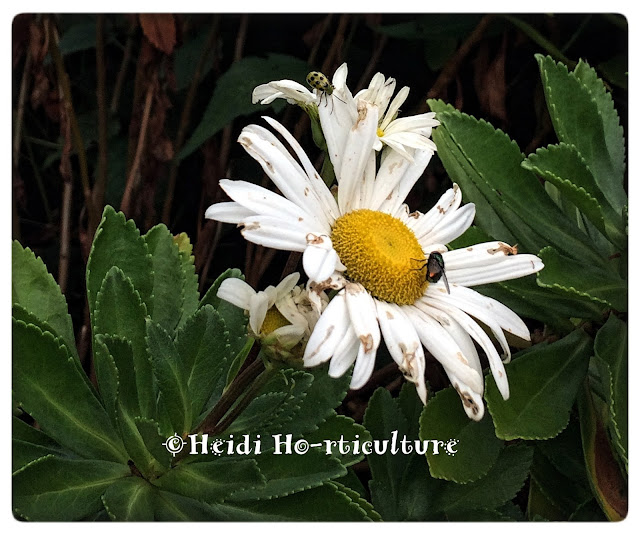 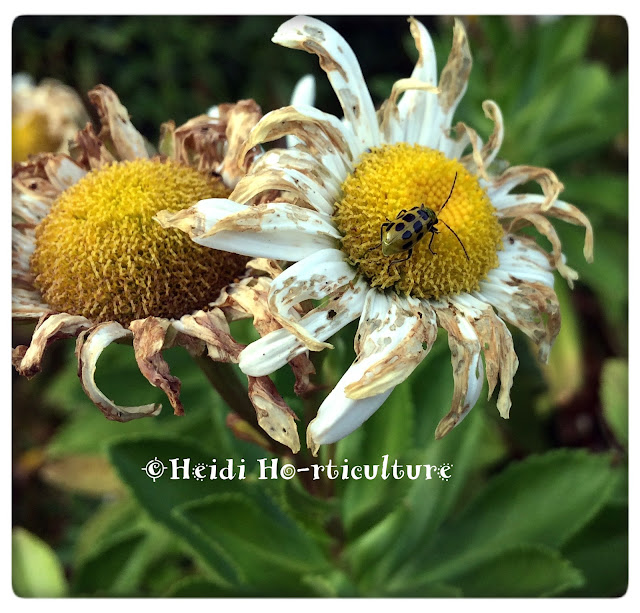 Feeding off both the petals and the central disk of florets.

Every single flower had at least one.

The worst part:  when they feel you are about to approach them, they quickly hide to the underside of the flower.  To make sure I collected each one, I grabbed the base of the flower and tapped/shook the flower over my hand.   In hindsight, I would recommend that you use a bucket or something to catch them, as several flew out of my hand before I could squish them. 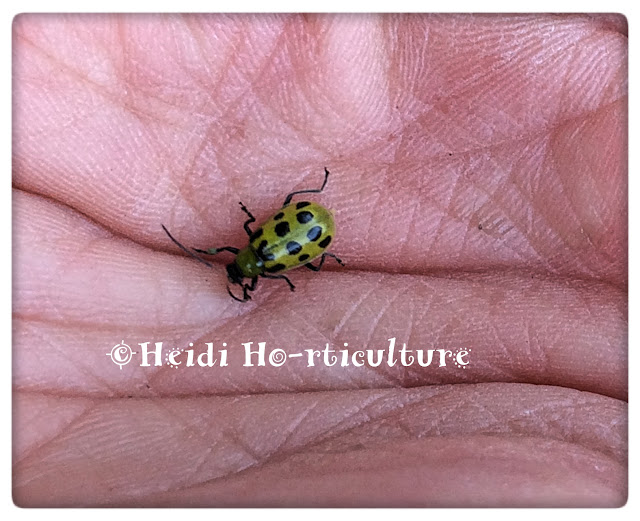 Here are several pictures to see their 12 spots up close. Six black dots flanked on either side. 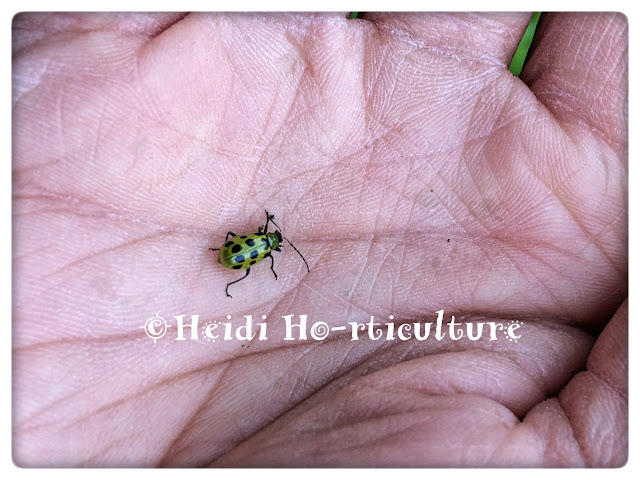 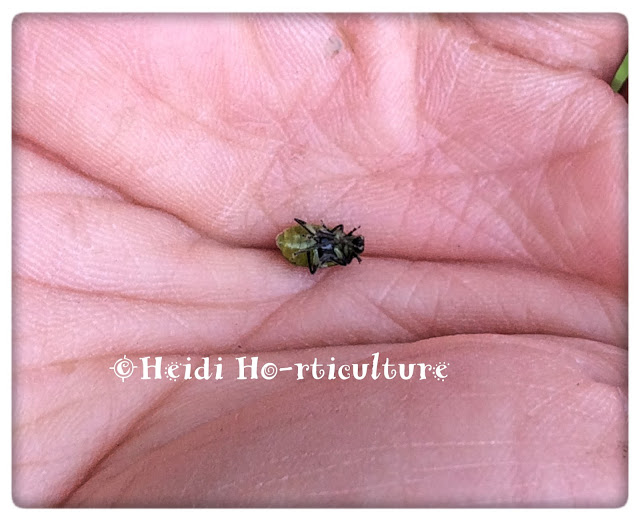 Like the Scarlett Lily Beetle, they too can "act" dead and roll over.  But, don't be tempted to dispose of them looking like this, within seconds they flip back. Best to squish. 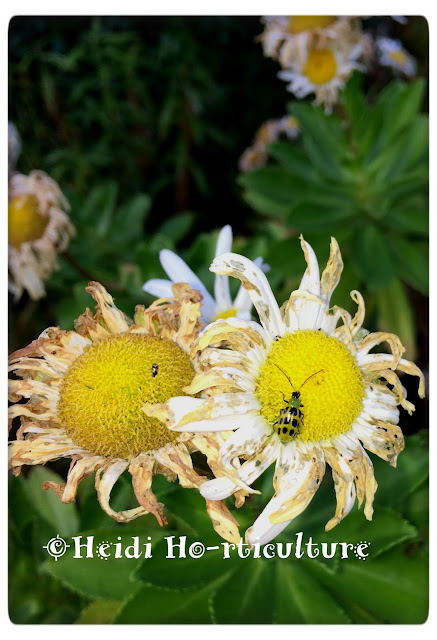 Since it's October, I believe this is the 2nd or 3rd generation of beetle.  Neighbours two doors down from us grow zucchinis. I suspect these beetles have come over to our garden and are partaking in one of their last meals before they hibernate in leafy debris.

Do the best you can to remove as many of these adults.  They overwinter in organic leafy bits at the base of plants.  Here is a great article on the beetle's life cycle.

If they eat Nippon Daisies, I wouldn't be surprised if they eat Chrysanthemums or other late flowering plants. Keep a look out.

After picking 4 different times during weekend, I managed to find over 21 beetles. Hopefully ridding them from our plants. Let's hope we significantly reduced numbers for next year.

One note:  Take a look at the base of this Nippon Daisy: 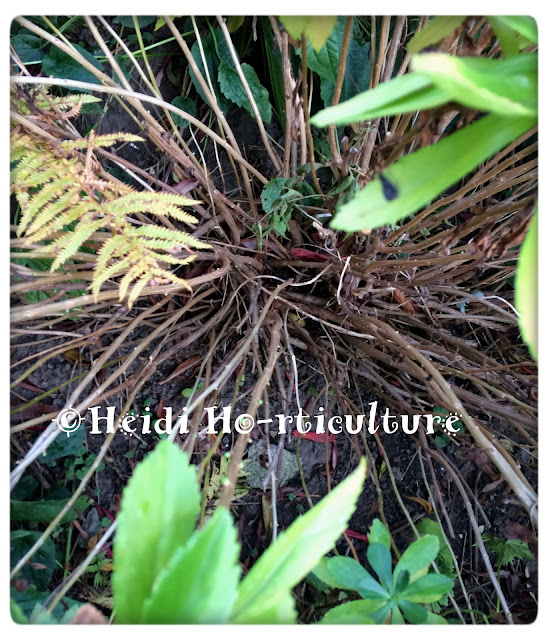 This past spring I was tempted to divide and re-situate.  I regret not doing that. It needs dividing desperately.  Probably one of the reasons the beetles were on the attack.  Weakened plants attract pests. Lesson learned.

In the next week or so, a good autumn clean up and another check of the flowers when it's sunny out, should reduce the numbers of beetles. Let's hope we have a really good cold spell this winter - to help kill overwintering insect pests like these.

Next year, we'll divide the plant and re-establish with some amendment.