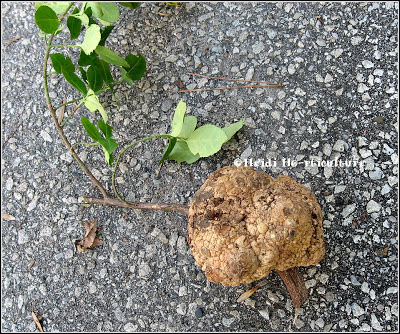 Many a time, I come across crown gall on Euonymus. Never, have I seen it this large. Galls can form on several plant hosts. A gall is a plant tissue growth or "tumor" caused by a bacterium infection. Here, it's been cut away from the parent plant in order to take a clear photo of its size. The parent plant: Euonymus fortunei "Sarcoxie".

The cause of this gall is a bacterium known as: Agrobacterium tumefaciens. Being soil-borne it enters the plant through wounds in the bark.  I find the areas where galls occur most tend to be overlapping and crossed over stems that crack from sheer weight of heavy growth or over-crowded growth. This bacteria is unusual in that it transfers part of its genetic material to the plant upon infection. It's quite complicated, but an absolutely fascinating process in forming the gall. The bacterium induces tumor like genetic material into the host plant, the plant then responds growing this form of tissue (gall) as a response to the genetic material invading the host.  A type of plant hormone is produced when the host plant is infected by Agrobacterium tumefaciens. These "hormones" cause rapid cell division and distort stems or root tissue. Where the gall situates itself is where obvious trauma or wounds have appeared on the host plant prior to infection. These galls can range in size of a small nut to the one depicted in this blog post! So amazing, eh?

Galls don't kill off the host plant. But they do interfere and inhibit normal plant processes. Vascular flow; (sap) water and nutrient transport is inhibited where galls form. This can weaken the overall health of the plant, especially if there is more than one gall on the host plant. Galls are usually situated on stems or trunk at the crown - base of the plant, closest to roots.

Because this bacterium is soil-borne, the main element of control is removing the gall and sanitizing secateurs after cuttings - where gall removal took place. I recommend cutting gall formed branches back to the main stem if possible. You want the wounds you inflict from cutting the infected area to be made well above the crown of the plant - avoiding close proximity to the soil. If you have wounds from removing stems close to the soil level, reinfection of the bacterium seems obvious to me. Yet, sometimes this is unavoidable. I try to follow the branching network where the gall is attached, to an area well above the crown. If the gall is on the upper portion of the plant, cut the stem at least 10-12 inches below where the gall was attached.

Please disinfect your pruners (secateurs) in a (1/10 ratio) solution (of bleach to water) after each cut. This prevents you from spreading the bacterium around to other hosts.

After gall removal, help reinvigorate your plant, by adding well rotted compost around the crown. Thin out over-crowded areas with routine pruning. Irrigate during drought periods and give a little extra TLC to bring the host plant back to health.