At work this week, my eye caught swiss cheese holes throughout leaves of some of the Asiatic Lilies we have emerging in our perennial borders. 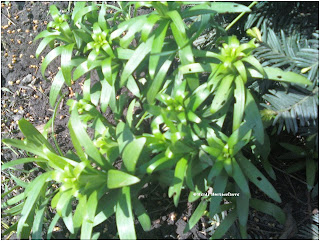 Here's evidence of their damage.  The Scarlet Lily Beetle (Lilioceris lilii) can devastate your lilies in a matter of days if not taken care of when you see this sort of damage.

One method to control these beetles is a proper fall clean up of any leaf litter, and good cultivation of the surrounding soil all around the area where the lilies are situated. Reducing debris, will prevent their success in finding adequate a home for the winter. Adult beetles rest and hibernate, so to speak - in dead, decaying matter close to their hosts. Fritillaria plants are often plagued with Scarlet Lily beetles.  It's suggested not to plant Fritillaria and Lilies in close proximity.

Control right now:  picking the beetles off and squishing them. (They are hard to squish with your fingers.) It's the best way. Since their hard shelled bodies are not easily harmed without extreme chemical pesticide usage. Flick at the lily foliage, and they will drop to the soil where they are easily seen. If there is a substantial bird population, placing the beetles on a sidewalk, drive, paved stone - you'll see sparrows and robins come and collect them for lunch.

Look for red little eggs, laid in a row too. These beetles are aggressive in breeding, they reproduce rather quickly.

Neem oil is a great alternative to controlling eggs and their larvae stage. Unlike the adult stage, Lily Beetle larvae have soft bodies. Neem oil coats them, when sprayed on contact and penetrates through their soft skin, killing them off.

The damage usually happens on the lower leaves first. Lift up the leaves and check their undersides for any hiding adults and any eggs. Be vigilant and get as many as you can see. Keep an eye on the plant for weeks later. They are pesky and can return, only to eat the flowers next.
Written By: Heidi-Hoe at Sunday, May 13, 2012